It is Halloween tomorrow, and as a confirmed paranormal and supernatural fanatic I absolutely revel in all things strange and spooky! As it is a time to traditionally fear the undead that cannot rest easy in their graves; I want to relate some spooky tales to celebrate the occasion.

I am Welsh born and bred, so I thought what better tales to tell than some original Welsh ghost stories and legends.

I have selected only a handful of spooky tales, as there are just too many to note here! However, these stories hold special significance to me as they are my personal favourites; some of which I was told as a child. I have even visited some of these haunted locations myself, and can say they are quite unnerving places!

Canwyll Corph (Corpse Candle)
Tradition dictates this was a pale light moving slowly above the ground, following a route from the house of a dying person to the Churchyard. Sometimes it was supposed to be possible to discover who would die, as the intended victim would appear as an ethereal form within the flame.

If two corpse candles were seen at the same time this was taken to indicate that two deaths would occur in the same household, at about the same time. If the corpse candle was seen early in the evening this indicated that the death would take place within a few days.

Gwyllgi (Dog of Darkness)
These terrifying apparitions took the form of a huge hound with a heavy fur coat and great glowing eyes.

The favourite ‘haunt’ of Gwyllgi were lonely Welsh country roads, of course at night-time.

These dog spectres were believed to be the devil himself chasing down his victims.

These ‘Devil Dog’ stories have been documented in many villages across Wales. In fact some lonely Welsh lanes are actually named after these legends; ‘Lon Bwbach Ddu’ (Lane of the Black Spectre) is one located outside a village called Marchwiel, North Wales.

Legend has it that wraith like beings live under the waters of this pool, and wait patiently for their next unsuspecting victim.

In years gone by there have been many mysterious deaths associated with this particular area, most notably many drownings. There have been many strange appearances of ghostly apparitions documented too. Seemingly the spectres just appear from nowhere, and beckon people over to them as though they are lost and require help. Of course by going to help them, you in turn seal your own fate! 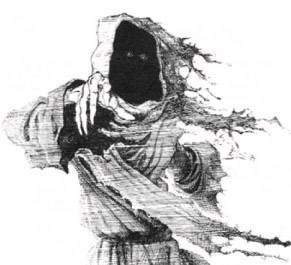 Beckoned to your death……

Devil’s Bridge
There are many local Welsh tales relating to ‘Devil Bridges’. In fact there is one such tale about a bridge near to where I used to live, but the story that follows is one of the oldest of such tales based high up in the hills of Aberystwyth, North Wales.

An elderly woman struck up a concord with the Devil himself one winter’s eve. Distressed that she had lost her cattle, which were stranded across a gorge, the Devil appeared to her and offered a solution.

The Devil said she should return the next morning, the bridge would be built, and he would then claim the first living thing to cross it. The woman agreed, and returning the next morning with her faithful dog as companion she couldn’t believe what she saw, a bridge.

The Devil eager to claim his own prize waited, but the old woman was wilier than he reckoned on. Throwing some food across the bridge her dog ran to retrieve it, the Devil then had his wish; but instead of the woman’s soul he had to make do with the dogs.

The Skirrid Mountain Inn, Llanfihangel
The Inn also acted as the local Courthouse.

First entry relating to this place was in 1110 when a thief was hung for his crime inside the Inn.

In the next 800 years that followed a further 182 criminals met the same fate there.

Now it is the scene of many a paranormal investigations, it is supposedly extremely haunted. Visitors have reported feeling a noose being placed around their necks; the invisible rope actually leaves its mark around the new victim’s neck!

St Mary’s Church, Minera.
This church was rebuilt as it stands today in 1865, but a place of worship existed on the site from 1577.

Supposedly this site is synonymous with black magic rituals and witchcraft; apparently a witch is buried within the grounds. There has also been reporting’s of people hearing a phantom train pass the churchyard; once the steam train ran adjacent to it. Local people have also seen ghastly apparitions dancing amongst the graves at dusk.

This location had history of intrigue and violence from the first.

The area the Hall was eventually built on runs close to an old Roman burial site, and is located near the 8th century Offa’s Dyke, which is a site where many battles took place between the Welsh and the English. The site is also part of the old motte and bailey castle placed there as an English system of defence.

Once the actual Hall was built, the original inhabitants were part of the plot to place Mary Queen of Scots on the throne of England. The subsequent owners of the Hall were then involved in The English Civil War (actual tunnels were carved out underneath the property running underground as escape routes). There were many murders and suspicious deaths from the first.

Consequently this Hall was notorious for being haunted. Unseen coach and horses would enter the courtyard, people would run into the Hall in haste but there was no one to be seen, people could be heard walking and talking in the rooms, cries would be heard in the night; so on and so on.

This Hall no longer exists as it was demolished in the 1960’s; however a farm house now occupies the location. All that remains of the original Hall are the outbuildings, and even in modern times there have been deaths upon the site. In the late 1980’s a group of young boys were killed in one of the outbuildings in a freak accident. 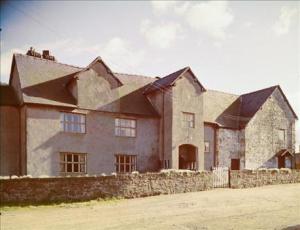 Cadwgan Hall before being demolished in the 1960’s

Baron Hall, Beaumaris
Derelict and deserted, situated amid countryside. This house has a history of vampirism.

Apparently one of the young daughters from the ancestral Bulkeley family met a sinister death, and her spectre still roams the grounds.

The spectre is supposed to be a terrifying sight to behold, actually capable of scaring the observer to death. So much so that the area around is still unoccupied, and even to this day no one ventures near there at night.

Within the grounds there is the tomb, where the daughter’s body was interred; even today it is guarded with a sturdy door, bared, locked and bolted. The ruins of the house have been vandalised, but this tomb remains strangely untouched. Why?!

Rofft Hall, North Wales.
Margaret Blackbourne of Rofft Hall was said to have been murdered in 1713 by her husband. She is often now referred to as “Lady Blackbird”.

The woman’s spirit was said to have been restless, the people believed she had become a vampire. This uneasy spectre was said to haunt the village of Marford, rapping upon the windows of the houses, begging to be let in.

Interestingly, the windows of the houses in the village dating back to this time, were all constructed with inbuilt crosses specifically designed to ward off Margaret’s uneasy ghost.

The spirit of the troubled Margaret – vampire perhaps?

Candelson Castle
Central to a lost village called Treganlaw (the town of a hundred hands).

Not much is know about what happened to the inhabitants of Treganlaw, although it is claimed that the village was buried under the sand dunes of Merthyr Mawr.

It is said that the castle and surrounding areas are haunted. Many old artefacts have been mysteriously found near the castle, and ghostly appearances are said to be frequent.

One of these artefacts is called the ‘Goblin Stone’. It is said that this object is haunted by a ghost that entices people to embrace it, thus entrapping them for all eternity.

Plas Teg, North Wales
A Jacobean Manor House, built by Sir John Trevor, a descendant of ancient Welsh gentry. He was Secretary to the powerful Lord Howard of Effingham at the court of the ageing Queen Elizabeth.

The house and the grounds have seen plenty of drama and violence. Not surprising that over the years tales of ghostly activities have been reported.

Paranormal investigations take place here regularly, and I have visited this house myself on many occasions. I can therefore say from personal experience, it does have an unnerving atmosphere.

Plas Teg ghosts include a drowned woman, a heart broken youth, a murdered wife, a vengeful husband, and the victims of hangings from the end of Judge Jeffries noose; even the oak staircase has a story. It is supposed to have been constructed from the timber remains of a ship from the Spanish Armada.

Apparently ghostly spectres are seen wandering the ruins. Dark hooded figures with skull faces have been reported. People venturing there to look at the ruins have also reported feelings of hopelessness, suffocation, extreme panic and terror.

The usual disquieting tales of spirits are reported.; crying, screaming, falling objects, rapping, banging, throwing of debris and so on and so on. 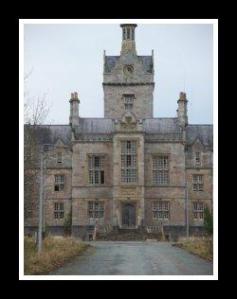