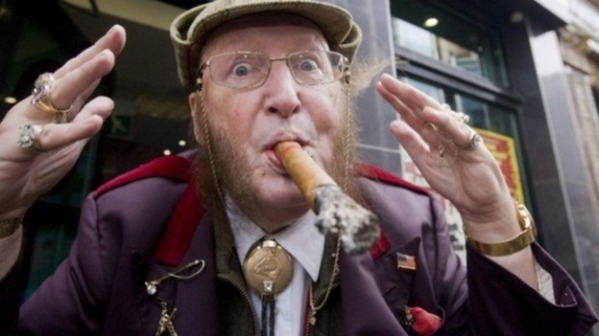 The one and only John McCririck.

Funny how when the tables are turned on Channel 4 Horse Racing pundit John McCririck he suddenly screams discrimination!

This from the chap who outwardly admits his derision for women! Viewing them as mere tools to be used by the greater and more powerful men in the world, himself included (or deluded)!

This cry of unfair dismissal was raised when the 72 year old was told by CH4 that they no longer required his ‘unique’ presenting skills. They have decided to reboot their programming, and Mr McCririck was not going to be part of it.

Mr McCririck then claimed it was his age, CH4 were being discriminatory against him. Perhaps CH4 had merely had enough of his ridiculous antics, not to mention the constant complaints from his female colleagues regarding his sexism!

Regardless, McCririck is determined to take this to court.

Seems that now he is on the receiving end of something he deems unfair, he has transformed himself it this paragon of virtue, this crusader of rights (as long as they don’t include women’s rights of course).

This screams sour grapes on McCririck part. It is a deed being done for his own wallet, not to highlight or prevent work place discrimination. John McCririck maybe many things, but an advocate of fairness and equality he is not, nor ever has he been! Just ask his long suffering servant, I mean his wife!

So, it seems that after years of hating women and treating them like dirt, he is finally reaping what he has sown. Albeit, in his own head, not in reality. Yet, even if CH4 were ageist they would be in good company; McCririck has disregarded discrimination laws and in fact advocated discrimination for many years. So, how can he now claim to be suffering at the hands of something he once heralded as a good thing?

I cannot keep a straight face over his absolute gall! I’m not sure how anyone listening to or partaking in these following court proceedings will either.

Lets just hope he gets an all woman jury! Fingers crossed, though I know that will be an outsider chance to beat any odds McCririck has ever given during his time as racing pundit!