Child poverty on the increase in the UK

‘Family breakdown, drug addiction, debt and education results are among the factors that could be used to measure child poverty in future, UK Government ministers say’ BBC News.

This reality check comes after the findings of The Institute for Fiscal Studies released their two year projection for how child poverty in the UK will rise by 400,000.

Work and Pensions Secretary Iain Duncan Smith responded by saying that the current income-based method of measuring poverty is too simple, therefore new indicators have to be agreed upon to measure this thoroughly.

Wow, is all I can say; and it took a UK Government how long exactly to realise that the measures relied upon to indicate poverty were failing? Where have they been hiding all these decades? Oh, of course, behind the curtain of their lives of privilege. Doesn’t this highlight just how out of touch these ‘leaders’ are with their own electorate?

Salary alone means nothing to poverty indicators; nothing is so ‘cut and dry’. I have mentioned this before; Poverty In The 21st Century

People can be working full time, and still drop below the poverty line because of; general household bills, unemployment, benefit reliance, family breakdown, increase in food prices, increase in travel prices and fuel, debt, house repayments, childcare, how large the family is, so on and so on.

At the moment a child in the UK is considered to be living in poverty if the household income is £251 per week or less. This then equates to 2.3 million children living in poverty. Now considering that as a fact which stands alone, too many children are in poverty; but now add that to the other indicators above, which are currently not being included in the poverty measures. Now I’d say that 2.3 million is looking severely under estimated as a figure; so low in fact I doubt any Government would like to consider the reality of the poverty that blights the UK!

All in all it is a nice figure to dwell upon, considering the UK is supposed to be a ‘developed’ country, wealthy and upwardly mobile! Seems to me that propaganda has never been so alive and well in Politics. It is just a question of whose faith Government ministers are trying to maintain; their electorates or their own? 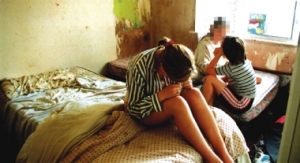 Many decisions have been criticised as increasing child poverty, but one factor has been blamed as highly significant; freezing child benefit. The Labour Party have now warned that by 2020 the UK would return to “sky-high levels of child poverty” unless the Government made changes to this and other areas. Yet, with or without child benefit people would be poor. Child benefit is hardly enough to compensate for dire wages, high levels of debt, rising living costs and all the other things that make a person/family poor!!!!! Benefits are not the answer to the root of the problems.

So, I wonder what has finally brought the issue of poverty to the table of plenty. Well, the Labour Party’s ‘picking’ at the current Conservative/Liberal Democrat Government no doubt has provided some encouragement. Shadow Employment minister Stephen Timms has been also blowing the trumpet of his own Labour Party Government; reminding the electorate of what a mistake they made in not re-electing them, laugh out loud!

Mr Timms has said that there had been a; “Big reduction of over a million in the number of children below the poverty line” when Labour held Government, and since the new Government gained power; “that number is now going up”.

Yet, what has any Government really done to improve the people’s lives? What one policy really has impacted on decreasing poverty in all its formats; from homelessness to child poverty? Answer, nothing substantial. They are good at bickering amongst themselves, blaming one another and scoring points; but facing the facts and dealing with then once in power, well, that is another story altogether! It doesn’t matter what Government is in power, things don’t significantly change for the people.
The major changes which are now creating significant impacts in policies, and reflecting poorly upon the UK Government is the economic crisis and austerity measures. Who knew this could be a positive thing?! This ‘series of unfortunate events’ has been a real kick in their rear; yet, people are still suffering, and not even the economic crisis has motivated the Government enough, well, yet anyway.
What will it take to make the Government change things??? How dire must it become for people, their people??

OK, so the Government has plans to carry out a consultation to consider what other factors need to be included to measure poverty. Yet, this is merely more time and money wasted, while people still live in poverty!

Even ‘The Child Poverty Action Group’ have raised concerns over this consultation, and proposed additions to the current salary measurement. They have questioned whether further indicators to mark poverty would only make defining it too broad and non specific (we all know the Government don’t deal with complicated very well). This too broad and non specific could only grant a free pass to any Government; they would then not be held accountable for any failings which could occur in this area. It would then be merely life in general to blame, not Government polices and taxation. A Government can’t interfere with life, the ‘free market’, capitalism or whatever else they can use as an excuse.

Anyway, while the Government bicker and decide to decide, poverty continues as it always has. A grim reminder that life isn’t all peaches and cream.

Not quite Guy Fawkes, but still his effigy is adopted, to signify what though?

I have been reading some posts, which don’t exactly celebrate the gunpowder plot that led to Guy Fawkes being captured on 5th November 1605. In them, Mr Fawkes isn’t deemed the ‘hero’ that some might believe him to be.

Yet, when I learnt about him in History, at school, I remember being in awe. I was about 12 at the time though!

Anyway, this post isn’t strictly about Guy Fawkes or a specific moment in History, but it is about how people perceive violent acts. What is it that still makes anarchist or revolutionary tactics appear to be ‘heroic’?

I want to play Devil’s advocate, if you will allow me too?

How often has peace changed something profoundly in the world?

Looking back, just over the UK’s history (above example included), it has been violence that has made an impact not peace.

Violent acts have stood out above and beyond. Violence is how change has been achieved over the centuries; whether good or bad. I suppose some might consider it as making the ultimate statement to those who think they have the control; in other words, no they don’t.

Does resorting to violence ever help anyone achieve an intended goal? Can it solve anything? If it doesn’t, then why are we still so fascinated with violence, and the history that is littered with such acts?

Hopefully, the world will recognise freedom through peaceful means one day, but at this moment in time, I’m not sure they want to.

‘All we are saying…..is give peace a chance’