Protesters gathered together this morning in Puerta del Sol, and soon moved through the city.

Here many places of business are closed especially those related to Industry. Thousands upon thousands have taken to the street to protest against Anti Austerity measures being imposed by the Government.

I am seeing reports of people being arrested (81 so far), and many have been injured, as Police use rubber bullets against protesters to quell the storm that has infused the city of Madrid. 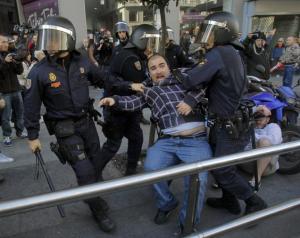 From my apartment I can hear the constant circling of Police helicopters; never a good sign.

The momentum of the protesters has been building for months. One notable protest/ strike was that carried out by the Miners outside The Real Madrid Stadium, which my parents who were visiting me at the time actually witnessed. The clash of protesters and Police was significantly violent, though that is not always the case with protests here in Madrid.

The Miners Strike in Madrid

This week though the pressure has mounted as one tragedy hit the news to poignantly highlight the stress, and strain people are under. A young woman actually took her own life by jumping from her own apartment building, because bailiffs entered her apartment to evict her. She could no longer afford her mortgage repayments and was so desperate she committed suicide.

It seems to be utter madness, yet this strike fever has swept Europe, the UK also being involved.

Why, well put simply the workers are fed up of austerity measures being imposed on the ordinary working person by a Government, and banking system that has failed them. Imprecise and elusive policies which are not being fully explained to the public, and cuts, cuts and more cuts to vital social services and wages.

We can only wait and see what the next steps will be by the Spanish Government and the protesters.