It is a very normal and accepted state of affairs; the older man and the younger woman. These relationships are so common place they have become a cliche. Yet, when the reverse is considered; an older woman and a younger man people seem to be sickened by the very idea.

Attraction, and even love aren’t always formulated from what we as individuals may perceive to be ideal. We all have different tastes and desires after all, because by our very nature or nurture, we are all different. Whether it be older men, younger women, older women and younger men, who really cares or more importantly why should we care? After all, it isn’t our business and it isn’t our life!

What I find I dislike most when I hear of or see other people’s reactions to an older women and younger man’s relationship, is that the older woman is so highly disapproved of. Almost as though once a woman is passed thirty it is game over!

Perhaps the reason for this is because once a woman passes thirty she is suddenly deemed unworthy of gaining love, affection and sex from anyone, especially a younger man? Could this be because she is considered to be well passed her prime functions of; marriage material, a baby making machine or sex goddess? If so I wonder whose biological clock (and just to let you know I hate this phrase), is actually ticking?

If we are all attracted to one another based on those three options we are making a rod for our own backs.

I find this aversion to older women and younger men to be contradictory, and quite sad actually. I say this not just because I am a woman either. There are so many intelligent, talented, beautiful and successful women out there, passed thirty, forty or even fifty. They still have their whole life to live. Yet, society insists on forcing these independent, fierce and capable beings into small and restrictive boxes, dictating what they should and shouldn’t be doing.

Isn’t it about time these boxes were crushed under these women’s designer heels?

I for one believe that; no longer should the soft top sports car be the preferred babe hunting vehicle of men only, it isn’t desperate to want to pay for your man’s designer suit, it isn’t unladylike or shocking to appreciate a younger physique, especially one that sports a six pack.

I say; let us live and let live!

Some words worth heeding……..

I have been thinking about jealousy, again, and the damaged people behind the emotion. Jealousy seems to be an unstoppable plague blighting humanity and no one can escape it!!!! 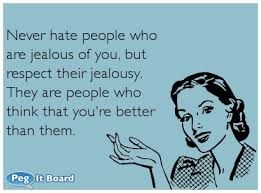